Okay, so it might be the day after Valentine’s Day, but it’s still Valentine’s Day weekend!  Love is in the air, and I wanted to do a spotlight on some Disney couples.  They’re not exactly the “top three” or anything, but just some fun ones I wanted to feature!

The Beast and Belle

This is one of my personal favorite couples.  I know some people claim “Stockholm Syndrome,” but personally I think it goes beyond that.  Their relationship is beautiful because it’s about more than just appearances.  And not only does it go above appearances, but Belle is willing to get to know the Beast despite the fact that his attitude is pretty poor in the beginning too.  They were persistent in getting their relationship to work, and unlike a lot of other Disney couples, it wasn’t “love at first sight” for them and getting married after they barely knew each other.  Given what they’ve been through, you know there’s no problems they can’t handle as a couple.

It doesn’t really get more classic than this couple.  Minnie is sweet and fun, and the perfect complement to Mickey.  She stands by him despite some of the crazy situations that he gets himself into.  But they also don’t fill the stereotypical role of the sweet, mild-mannered woman and outgoing man.  Instead, Minnie has a feisty side to her, and speaks up to Mickey when she feels that she needs to.  Mickey brings fun and excitement to her life, and she brings a level-headedness and maturity to his.  That’s working well together. 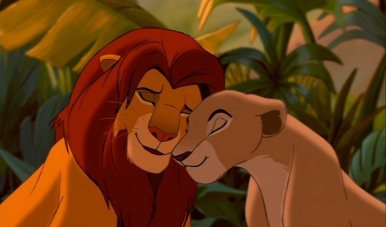 Lots of good relationships start with the basis of friendship, and Simba and Nala are the perfect example of that.  They get along really well as kids, spending all their time together and having fun together.  Though they’re separated for awhile, once they are reunited it’s like no time has passed at all – except instead of being just friends, there’s a romantic aspect to their relationship as well.  Nala and Simba truly bring out the best in each other – she convinces him to take his rightful place, and once he does so he is inspiring to all.  They may have already been betrothed since birth, but it just goes to show that they were truly meant to be together.

2 thoughts on “Spotlight on Disney Couples”