I should start this review by saying that I’m a huge Into the Woods fan.  I’ve been performing in musical theater since I was 11 years old, and have seen tons of musicals.  Into the Woods is my favorite – I saw the revival on Broadway three times.  As a middle school student I would most on musical message boards and chat about Into the Woods all afternoon.  So when I heard they were making a movie of it, I was both “excited and scared,” as Little Red Riding Hood would say. Excited to see it come to the big screen, but scared they might ruin it.

I have to say, overall, I was very pleased.  I might have loved it – I’m still deciding and would like to see it again, but I definitely liked it a lot.  For the most part they stuck really closely to the original musical.  Most of the dialogue and songs that were in it were the same, it was only some plot points that were changed and stuff that was cut.  I was really, really impressed by the performances in it, as I’m sometimes skeptical of Hollywood stars taking on Broadway tunes.  Luckily, they definitely pulled it off.

Spoilers will follow from here on out, so if you haven’t seen it or don’t want to know, come back after you’ve watched the movie!

If you’re familiar with the musical, I’ll outline exactly what was changed.  A couple of lines here and there were changed (notably, “On the Steps of the Palace” was in the present tense, rather than past tense, a change that I felt really worked).  Songs that were cut include I Guess This is Goodbye/Maybe They’re Really Magic, First Midnight, Ever After, So Happy, Agony reprise, No More, and half of the finale.  Most of them were filler songs that they got away with cutting by inserting a couple of lines of dialogue, and to be fair it probably would’ve been too long for most moviegoers if they had kept everything.  Plot points that were changed include Rapunzel not dying and the Prince and Baker’s Wife presumably only making out, not actually sleeping together.

One of the big things that the movie has going for it is the fact that they have the ability to add a lot of the fantastical elements to it with lots of cool special effects.  Some of the songs transitioned to actually visualize what the characters were talking about, like going deep into the belly of the wolf.  And of course anything with the witch and her magic came off really well on the big screen.  The film just looks really good.

The talent was very impressive.  Meryl Streep did a good job overall, although as a Broadway lover I just can’t compare her to Bernadette Peters.  I did, however, love both Anna Kendrick as Cinderella and Emily Blunt as the Baker’s Wife.  Both were fantastic both at singing and portraying the intricacies of the character.  James Corden was a perfect Baker, though his singing wasn’t the strongest in the film.  And Chris Pine as Cinderella’s Prince was wonderful – he was the perfect choice for that role.  He was able to portray the Prince both as someone charming and likeable, as well as kind of a jerk, which is a pretty hard thing to do with that character.  And I was super impressed by Lilla Crawford as Little Red Riding Hood.  Another part that can be difficult because she has to portray both innocence and sarcasm, but she did it quite well.  Everyone else was good, but those were the real stand-outs.  There were no weak links, no one that you thought shouldn’t have been cast. 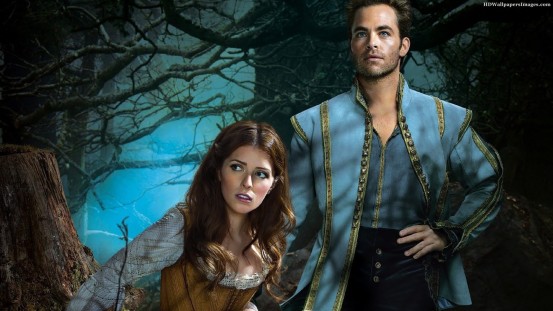 I love the music in Into The Woods, and in the film version I can highlight a couple of songs that stood out for me.  Agony was probably the best.  They did an over-the-top, great job with it that just had the audience laughing the whole time.  I thought Meryl’s strongest moment was actually in Stay with Me, which was very moving and vocally strong.  And Emily Blunt killed it in my favorite song, Moments in the Woods.

Now for the few negatives I had, mostly to do with what was cut/changed.  I know it seems cliché for a big fan of the musical to complain about the changes, but let me explain the two ones that mattered to me and why.  First of all, cutting Agony reprise, I think, was a mistake.  Aside from the fact that the song is hilarious (even better than the first Agony in my opinion), it provides a little more context for the Prince’s actions later on.  In the movie it feels like his hitting on the Baker’s Wife kind of comes out of nowhere.  But in the musical it’s already established that he’s, well, a bit of a playboy.  I understand that Disney wanted to keep it a little cleaner though.  Rapunzel’s Prince ends up being pretty much perfect in this version. 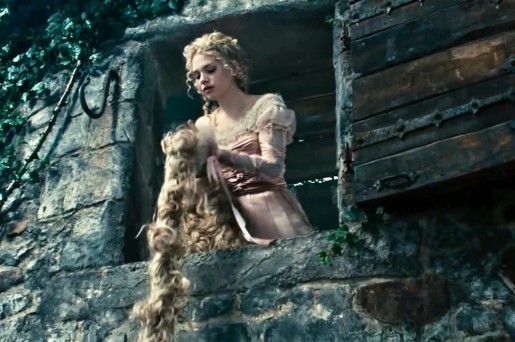 Speaking of Rapunzel, instead of dying she just runs away from her mother.  To me this is huge and loses a ton of impact for the Witch’s character arc.  The words in the Witch’s Lament just don’t seem as powerful.  “Now you know what’s out there in the world/No one can prepare you for the world” doesn’t have as much potency when Rapunzel has run off with her prince, presumably to live a happily ever after.

Those few negatives really come down to the fact that I think Disney was trying to keep its PG rating, and that’s really what makes the film less than perfect.  It’s not a story that’s really meant for children, but by trying to take out some of the darker stuff it loses what makes it so impactful to adults.  But I’m actually surprised at how well they did maintaining some of the dark overtones, even if it isn’t quite the original.

I don’t re-watch movies very often, with the exception of animated films.  But I do plan to buy Into the Woods when it’s released on DVD/blu-ray, which says a lot about it.  Definitely one of my top non-animated films in a long time.

One thought on “Into the Woods review”