I’ve decided to go back and re-watch every Disney full length animated feature from the beginning, in order.  And I’m going to share some of my thoughts with you!  Categories I’ve included as highlights, low points, music, villains, fun facts, where the World (where the movie is represented in Walt Disney World), and my personal rating.  Let me know what you think and if there’s anything else I should discuss!

Highlights:  Snow White is a very special Disney movie because it was the first full length animated feature.  That alone, and its monumental place in Disney history, makes it a must see for Disney fans.  The really fun thing about it though is that it still manages to be an entertaining movie beyond having a purely historical aspect.  While it is different from movies today, it is still enjoyable to watch.  The characters, especially the dwarfs, are fun.  Their little gags are laugh out loud funny.  And although the story is simple, it’s a good one.

Low points:  Snow White is a likeable character, but you can’t help but get just a little bit fed up with her naiveté.  Even 5 year olds know not to let strangers into their houses, and especially not super creepy ones offering them food.  And after the dwarfs have specifically warned her that her stepmother might try to disguise herself and try to visit.  Sigh.

END_OF_DOCUMENT_TOKEN_TO_BE_REPLACED

Coming at you today with another non-Disney related, subscription box review.  This time the box is Bestowed, which I went with after being offered a discount of 3 months worth of boxes for $36.  It sounded interesting so I decided to give it a go!  The idea behind Bestowed is that they offer you healthy products, mostly snacks, and they are recommended by Heather Bauer. 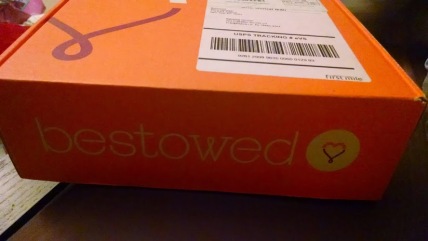 Maybe August was not the best time to sign up, but I was rather disappointed with my first box, the September box.  It was billed as a “back to school” box, and a lot of the items seemed geared toward kids, of which I have none.  Nothing is full size either, but rather sampler sized or a one-serving packet.  Compared to NatureBox I’m much happier with that one and feel like I get more for my money!  Some of the stuff was good though.  Here’s a look at what was inside my box:

This is a one serving, 100 calorie pack.  They tasted pretty much exactly like Cheeze-its, which is good since I love Cheeze-Its!  They are however made with all natural ingredients.  Like regular Cheeze-its they were a tasty snack but not a super filling one, which is something I’ve been seeking out more with my snacks.  Still, if you are craving a cheddar cracker but want something natural this is a good choice.  Although I will admit I was a little freaked out by the old people faces printed on the crackers!  A bit weird.

A box of 6 100 calorie packs costs $4.75, so this one pack was worth $0.79.  There was also a coupon for $1.00 off a Funley purchase but I don’t plan to use it as these aren’t easily accessible at my supermarket and I didn’t like them enough to go seek them out elsewhere.

END_OF_DOCUMENT_TOKEN_TO_BE_REPLACED

This was a weird week.  I was not feeling at all well on Sunday.  When I got up on Monday I was better but still definitely off.  I wasn’t sure if it was allergies or something else – but then I felt fine by Wednesday!  So it was a bit up and own for me but ultimately the week of running ended on a high note.  I’ve also been noticing some tightness in my left calf, so I’ve been trying to do more stretching and using a foam roller for that.  Hopefully it goes away soon.

Monday I attempted to run but I realized about halfway through that it was not a good day for that, and I headed home to rest before work instead of trying to complete the run.

Wednesday, on the other hand, was great!  I’m loving evening runs and not really looking forward to training for the Princess Half, when I feel like I’ll have to do some of my runs early in the morning to get a feel for that.  This was my best time yet.

And on Friday I did my 8 miles.  I kept it under a 12 min/mile pace and felt really good about it.  These long runs are helping me to feel much more confident about the Tower of Terror 10 miler! 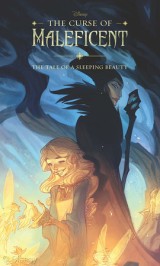 After I was underwhelmed with the Maleficent movie, I saw that there was a novelization made of the film.  It’s called The Curse of Maleficent: a tale of a Sleeping Beauty, and is written by Elizabeth Rudnick.  While this is a book that was written in conjunction with the film (i.e., it’s not a book that came first that they then made a movie out of), I was hopeful that the story told in a different way might make me like and understand it more.  Though the book is for children, I have no problem with that – I’m a children’s librarian, after all!

Ultimately, this is an okay book adaptation of an okay movie. It follows the plot of the movie pretty much exactly, so you won’t get much more out of the book if you saw the movie, which is what I was hoping for. The flaws I have with the movie are obviously the same as the book so I won’t get into that here – you can check out my review of the movie if you’re interested.

END_OF_DOCUMENT_TOKEN_TO_BE_REPLACED

Running a Disney race for the first time (or even the second or third time!) can feel really overwhelming.  You might have a lot of questions, so I wanted to do my best to put them all in one spot so you can get some answers to everything that’s going on.  I’m going to break this guide into two posts: one for all of the pre-race stuff, and one for questions about running and during the race itself.  And a shout-out to my friend Stephanie for some of her help with this FAQ!

How early should I register?

As soon as you possibly can!  RunDisney races have been selling out within the first day of being open.  You can also get access to early registration if you have an annual pass or you are a DVC member.   The 5k races tend to last a little longer, but even these have been selling out, so if you want to guarantee a spot in the race you really should register as soon as it opens.

What happens if I register and can’t attend?

RunDisney does allow you to defer your registration to the next year (excluding 5k’s and kid races).  For example, if you registered for the Princess Half Marathon in 2015 but then you can’t do it for some reason, you can defer to the Princess Half in 2016.  However, there is a fee that is charged for this.  You can get more info on the RunDisney Website.

What is proof of time?

Proof of time is a way for you to “prove” that you can finish the race in the time you say.  You can submit your finishing time for another race.  Usually they will accept a time for a race that is 10k or longer.  You can use another RunDisney race if you have one, but any other race with an officially recorded time should work too.  You can enter it upon registration, or you can go back and send it in to disneysports@trackshack.com.

END_OF_DOCUMENT_TOKEN_TO_BE_REPLACED

This week was a pretty significant one for me in terms of running, because as you’ll see further down, I proved that I can actually do 10 miles!  So the moral of the story is that I will survive the Tower of Terror 10 miler that’s coming up in just a few weeks.

Monday was not my best run, but I got out there and did it and that’s what matters.

Wednesday was my day though!  Since I didn’t have to be into work until later, and this week my long run was only 3 miles, I decided to try and do 10 miles.  I said even if I walked most of it I just wanted to see what 10 miles felt like.  So what I ended up doing was walking for 4 minutes and then jogging for 1 minute.  Not only did I finish 10 miles but I had a much better time than I ever thought I would!  So I know that even if I take it relatively easy during the race at Disney I’ll have no trouble finishing!

And Saturday I did my 3.1 miles including the Magic Mile.  I think I kept my magic mile right around 11 miles/min, and then slowed down a little for the rest.  But it was a pretty good run.  Especially since I didn’t do any evening runs this week and those are usually the ones I do better on!

There are so many Disney songs. Seriously. How am I supposed to pick just one to marry, one to kill, and one to refurb?  Heck, even picking a whole soundtrack for this will be difficult!  I’m sure there will be ones that I’ve forgotten about, and I’ll read what others have done and say, “Oh yeah, I forgot about that!”  But these are the ones that come to my mind. 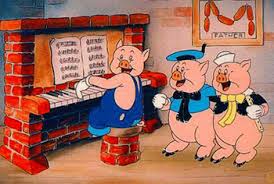 There aren’t really many Disney songs that come on where I go, “Ugh, I wish this would stop.”  I’m sure there are some that I’m not remembering, but since I don’t like them I don’t listen to them!  However, this one came to mind because it’s on one of the Disney collection CDs I have.  It’s cute and all with the short, but the song on its own?  No thanks.  It’s just annoying and one of those songs that gets stuck in your head all day!

END_OF_DOCUMENT_TOKEN_TO_BE_REPLACED

I have a lot of hobbies – quite honestly, I have so many of them that I don’t have enough time to do everything that I want to do!  One of my hobbies is scrapbooking.  However, I’m so behind on my scrapbooks.  I used to do one for all of our major vacations.  Well, I still haven’t finished the one from our 1st anniversary cruise to Bermuda.. which was almost two years ago now 😦

Maybe you’re like me, or maybe you’re just not very crafty.  Well, you can still have some awesome scrapbooks to store the memories of your Disney races thanks to the Etsy shop Love Run Scrapbooks!  She makes up Disney themed running scrapbooks that you can just put your own pictures into.  It’s super easy and makes for an awesome keepsake! 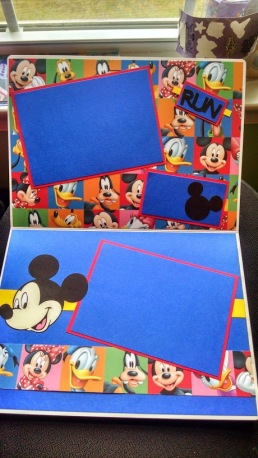 In addition to the scrapbooks where you can put your own pictures, she also offers really nice race bib books to keep your race bibs in.  There are a variety of differently themed books that you can choose from, and if you want something designed to a specific race she can do custom orders as well!